On February 28, three of our high schoolers joined other talented youth in our community from other Dougherty County high schools to participate in the 6th Annual Community-Wide Youth Concert for Black History Month at the Municipal Auditorium in downtown Albany.

Under the direction of high school musical director, Mrs. Christine St. Jacques, freshman Mikyla Porter, and juniors Nancy Johnston & Amber Mullins joined in a variety of old gospel songs and African heritage songs that made for an entertaining and inspiring concert that blessed those in attendance.

Dr. Dougherty stated, “I am so proud of these young ladies and how they represented our school well as a part of this community-wide youth choir. Interacting with students from other schools in the community and singing before a large audience including community leaders was a great experience for them. They are looking forward to participating again next year!”

We had a great morning yesterday at our student-led See You at the Pole event. We gathered around the flagpole at 7:30 am and then went to the gym at 9 am.

At SCA, we work to develop student leaders. Yesterday, they led our students in worship and in prayer for our country. Thank you to each student who played a part in this special day.

On Friday, August 10, we launched our 34th year of Christian school ministry to the greater Albany area. We are 60 staff members strong to deliver academic excellence within the context of a quality, Bible-based education to the 400 students who will call SCA home this year.

Joining us this year are new staff members:

We are so glad that God has called them to serve alongside us. Please welcome them to the SCA Family!

It has been a busy spring raising necessary funds for our school. Thanks to all who were a part of each event to make it fun and productive for our school! The Elementary Jog-A-Thon and the SCA Silent Auction are in the books. We are two-thirds of the way there with our Secondary Spring Fundraiser coming the last week of April.

The first event was our Elementary Jog-A-Thon which took place on Friday, March 23. Because of the efforts of our elementary students in asking for donations, they were able to raise $9938 for SCA! What a blessing to bring in that much money for the school, and what fun they had that morning before we left for spring break! Thanks to all of the elementary students and parents for making this year’s Jog-A-Thon a huge success!

The second event was our annual SCA Silent Auction that took place on Friday, April 6, at Sherwood Baptist Church. We had another great list of items up for auction–over 150 total items! Through an online portal/app, individuals bid on items for over two weeks. When the final bell had sounded at 9:00 PM that night, we raised over $11,125 for SCA! Thanks to everyone who helped on the auction committee as well as those who bid (and won!) on our auction items. A special thanks to the many individuals and local businesses who donated items to make our auction successful!

Our final spring fundraiser will be the Secondary Badminton and Ping Pong Tournament. Information packets will be sent home soon. We will be holding separate high school and middle school tournaments for each sport with various competition levels. Students will have the opportunity to solicit donations to cover their admission fee to be a part of the tournament.

Congratulations to the Varsity Soccer Lady Eagles for winning the 2018 Under The Cross Tournament this weekend! The tournament included 12 girls’ teams from throughout the state. They defeated the HALO team from Athens 2-0 to claim first place. The girls earned the title by defeating Central Georgia then tied Robert Toombs Academy on Friday, then defeated Calvary and HALO on Saturday. They finished the tournament 3-0-1.

They had their greatest test in the semi-finals against a determined Calvary team. After leading 1-0 at half, Calvary tied the match and it went into overtime. After a scoreless overtime, the game went to PKs. Each team scored their first four PKS. The match would be determined on the fifth kicks. Junior Hannah Huckaby was successful on our fifth kick while freshmen keeper Natalie Brock blocked the fifth penalty kick from Calvary! It was an exciting match!

The varsity boys soccer team competed against 14 other boys’ teams from throughout Georgia. They reached the semi-finals and lost to a strong HALO team. They finished the weekend 2-2-0.

Thanks to the Lord for a great weekend with good weather. A special thanks to all of our parent volunteers who made this tournament possible. It is a privilege to host the largest high school soccer tournament in the state. We can’t do it without the help of such great parents!

Congratulations to SCA’s STAR Student and Teacher – Casey Gregors and Mrs. Sabrina Davidson. Casey and Mrs. Davidson were honored today in a STAR Student/Teacher luncheon sponsored by the Albany Area Chamber of Commerce.

The PAGE Student Teacher Achievement Recognition (STAR) program, now in its 60th year, is sponsored, administered and promoted by the Professional Association of Georgia Educators (PAGE). Since its creation by the Georgia Chamber of Commerce, the STAR program has honored nearly 26,500 students and the teachers they have selected as having had the most influence on their academic achievement. To obtain the 2018 STAR nomination, graduating high school seniors must have the highest score on a single test date on the SAT and be in the top 10 percent or top 10 students of their class based on grade point average.

We are very proud of Casey and Mrs. Davidson and the academic excellence they exemplify at Sherwood Christian Academy!

Congratulations to Coach Mark Walker and the SCA middle school girls basketball team for winning the GICAA state basketball championship today in Macon! The girls completed their championship run by beating Westminster Christian Academy from Watkinsville by a score of 35-30. They overcame a 7-point halftime deficit with a strong third quarter. Several made free throws from Joy Kendrick and Kyla Raven sealed the win. This is the first middle school state title in school history! They finished their season 12-1. Congratulations, Lady Eagles! 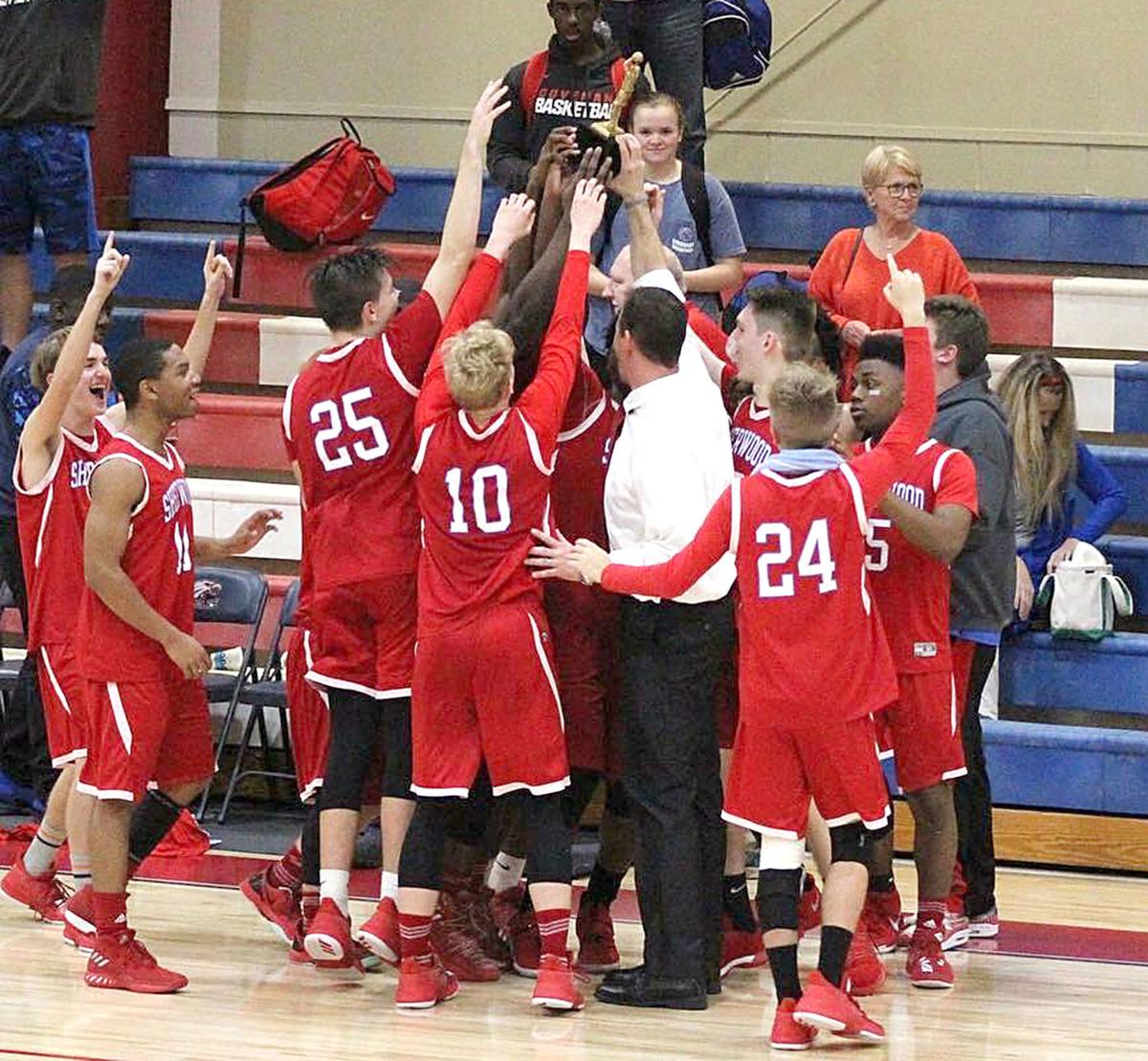 Congratulations to the SCA varsity boys basketball team for finishing first in the GICAA I-AA South Region tournament Friday night by defeating Calvary Christian School of Columbus by a score of 90-72! Stantravious Smith scored 35, Colin Dougherty added 22 and Anthony Adams and Addison Pollock both contributed 12 each. This is the first boys region title since 2014.

Coach Evans and the team will be the #1 seed in the South as they begin the state playoffs this Saturday in Macon versus Community Christian School of Stockbridge. Go Eagles!

The Middle School Girls’ Basketball Team and Coaches Mark Walker and Princeton White continue their special season as they prepare to play in the GICAA state championship game this Saturday (Feb. 10) in Macon against Westminster Christian Academy (Watkinsville). The game will be played at Central Georgia Technical College at 11 AM.

The girls earned their trip to the state championship with three impressive wins in the sectional games played in Milner this past week. On Monday, they beat a very good Central Christian (Sharpsburg) team by two points thanks to a three-pointer from Joy Kendrick in the final minute of the game. Then they turned around and beat host Rock Springs Christian Academy 23-16 to move to the Final Four. Finally on Saturday, they won a hard fought game against a very talented Harvester Christian team from Douglasville near Atlanta by a score of 28-26. The win brings their record to 11-1 with their only loss of the season coming on the road at Brookwood School.

Please pray for their effort and performance as they prepare for the big game this week!

Members of the team include:

On Thursday, January 11, SCA received one of the prestigious 2017 Environmental Awards at the Keep Albany Dougherty Beautiful Annual Volunteer Luncheon at the Albany Civic Center. We were pleased to accept the Beautification Award presented by Albany Mayor Dorothy Hubbard and County Commissioner Chris Cohilas.

Our secondary school was recognized for its community service day project on October 6 to the people in the area around Bonneyview & Merritt Streets for the Fight the Blight initiative in downtown Albany. That particular day was very warm for early October, yet our students numbering 240 along with 8 class sponsors, completely repainted Grace Emmanuel Church of God in Christ, two storage buildings, some basketball goals, four nearby duplexes as well as picked up trash in the surrounding lots. It was a massive work effort!

Nearby residents came by and personally thanked the students for improving their neighborhood. The pastor of Grace Emmanuel Church thanked us for the work we did for his congregation. Coach Davidson shared just how proud he was of the effort everyone put in that day to help bless our local community.

Accepting the award for SCA along with Coach Davidson were high school student council officers Brisa Rodriguez, Brynn Davidson, Casey Gregors, Nathanael Sancinito, and Burch Langstaff. Many thanks to all of the participants of our fall community service day for helping SCA earn this prestigious award!