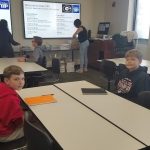 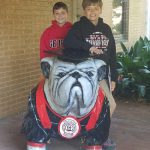 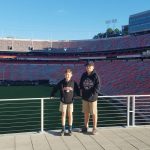 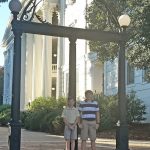 SCA fifth grade students Tripp Roberts and Wesley Brooks attended the Duke TIP Fall Academic Adventure Day at the University of Georgia. Both students enrolled in the course “Cellular Gene-ius: An Introduction to Microbiology and Genetics.”

They learned about genes and DNA in human and plant cells. They learned genetic terminology and were introduced to Mendelian Genetics. They also constructed edible DNA models and learned how to predict genotypes of a particular cross using Punnett Squares. While learning about plant cells, they completed a hands-on lab and extracted DNA from strawberries.

The boys observed some of the other classes as well. Students in the “Shark Attack” class dissected a real shark and the “Aircraft and Spacecraft Design” class designed and built aircrafts and tested them outside on the campus lawn. So, the boys are excited about the possibility of taking another class in the spring!

Before and after class, they were able to squeeze in some sight-seeing on campus. The boys visited the historic UGA arches, shopped around in the bookstore, and stopped by Sanford Stadium. They had fun spotting some of the dozens of unique bulldog statues installed around the campus and Athens area.