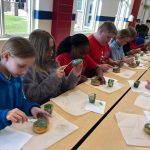 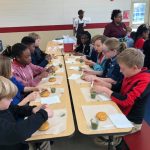 The boys’ and girls’ varsity basketball teams spent the beginning of their Thanksgiving break competing in the Northside Methodist Academy Thanksgiving Basketball tournament in Dothan, AL. Both teams showed up strong and took first place! Each team had to defeat the home team the Knights of Northside to move to the championship game on Tuesday evening.

The boys faced a physical team from Escambia County (AL) in the nightcap. Though the Eagles led the entire game, the Cougars closed the gap to one point midway through the 3rd quarter, but a critical 3-pointer by Colin Dougherty pushed the lead back to four and the boys went on to win 57-47. Eagles KJ Brown, Caleb Wiley, and Grant Raven received All-Tournament Awards with Grant receiving the MVP award! The boys are sitting at 7-1 on the young season.